The following articles ran in the Fairfield Minuteman. Click on each to view a larger image.

The Citizen also ran a nice article. In fact, there's about 18 different articles and letters to the editor there. 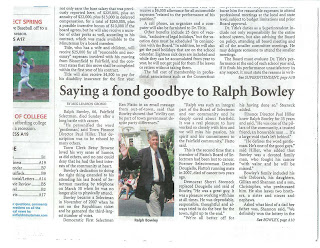 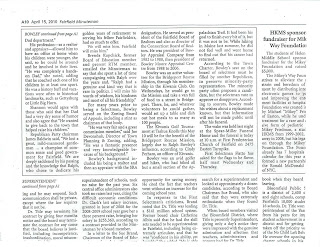 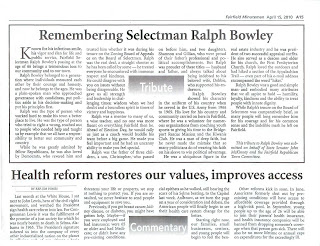 We said goodbye to a good man yesterday. A great man. A man from whom we all learned and continue to learn. A man who served his country, his community, his family, and his friends, right to the very end. But beyond his service, there was something else. Shannon was right yesterday when she said, "there's just something about Ralph." Something about his warmth and humility - something that made it impossible not to feel welcomed and comfortable when he was around.

Like most of us, I remember party after party at the Bowleys. I remember Ralph at the grill, Deb in the breezeway, Chris on the piano, Gilly trying to keep her friends away from us (but let's face it, we were irresistible), and Shannon raising a commotion. After he was done on the grill, Ralph would make his way inside and sit, at which point a steady stream of people would rotate through the chair next to him, sharing stories, telling tales, and usually receiving advice (though they may not have recognized it as such at the time). Around 10 or 11, Ralph would decide he was done, and head off to the bedroom. He'd be back in a few minutes - all ready for bed and done up in his jammies. He'd smile, wave, and head off to sleep. Ralph was so welcoming that even when he clearly wanted to go to bed, he didn't want us to leave (...though truthfully, had he asked us, we probably wouldn't have left anyway :-)

Bill made an interesting comment yesterday - even during our goofy teenage years, when all we wanted to do was establish our independence and strike out on our own - even then, Bo was never hesitant to bring everyone to his house to chat up his parents. It was always clear just how proud he was to be their son.